Spending Quality Time with the Family

I have been away for a while, for that I apologise.  Nothing spectacular has happened to bring me back to my blog, I just thought I should swing by and say hello.  A bit more of a photo story today – that’s good for those of you that don’t like to read.

I stopped by the coffee shop the other week with Jean-Claude, our chef.  We were waiting for the supermarket to open and had time for a coffee when I saw the family at the table opposite fully engaged with each other.  I like the idea of family holidays, it’s a time when you can all get together from your busy schedules and spend time with each other and just catch up – you know what I mean?  A good old chin wag and a joke, pulling faces and making laughter as you chat and interact endlessly until the sunset ??? 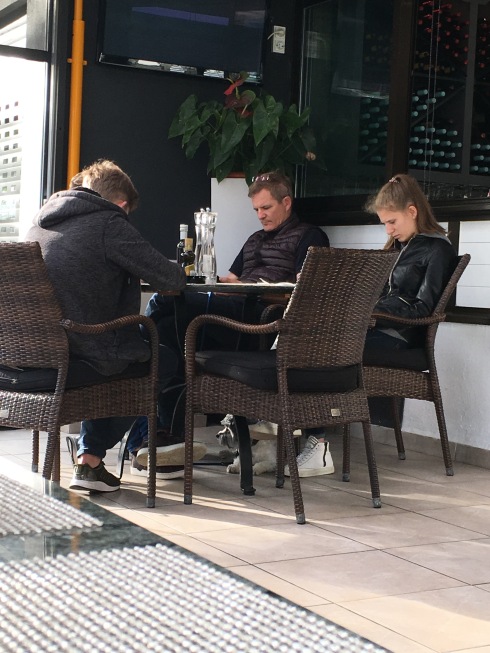 Alternatively – find a café with free wifi and behave just like you are at home in Germany while you text your friends telling them what a wild time you are having in Mallorca.

I have mentioned Jean-Claude before, the magical chef with more than his fair share of Parkinson’s.  Here he is, a sharp old boy who just can’t control the movement of his body as he would like.  To the unknowing onlooker, you might just think he was pissed at 8 o’clock in the morning. 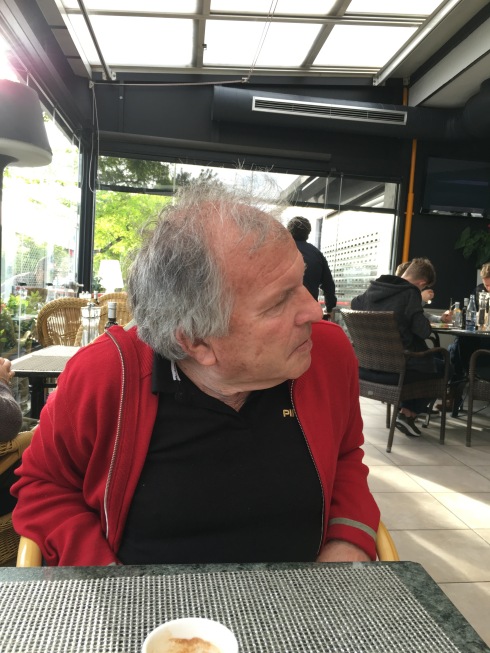 But this old boy is one sharp cookie.  We were recently talking in the crew mess, JC with a glass of red in one hand, a knob of cheese in the other (yup – stereotypical french man, probably had garlic in his pockets too) when he said something in french to me that I roughly translated as,

When I die, I want to come back as a shower in an all girls school

In my mind, I was questioning if I got the translation right.  Let’s be fair, it’s not in your every day phrase book unless perhaps you are on the Monty Python payroll.  As quickly as the questioning look appeared on my face, a little wry smile appeared on JC’s – it seemed I had nailed the translation perfectly !  I laughed immediately and then had to translate for Matt the deck hand as he had no idea why we were both laughing so hard.

Moving on – I have been treating myself to an hour on the beach at the weekends.  There are some benefits of my job, small perks that one must really take advantage of in order to maximise your time away from home.  I found a quiet secluded spot, with not too much going on, took a book and a bottle of water and relaxed for an hour. 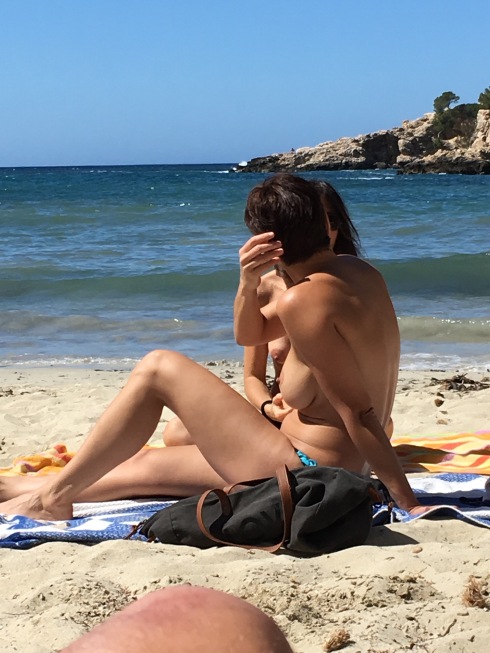 Something of a distraction so early on a Saturday morning !

But talking of treats – there is a place here in Palma called ‘Cappuchinos’.  This place sells what is by far the best carrot cake I have ever eaten so as a small treat this weekend, I also headed there.

Then I took the next photo.  Later that night I noticed the timings on the photos were just 3 minutes apart

The treats have been fast and furious this week mainly because due to an injury, I have had to completely refrain from any exercise.  A little bit of knee pain last week after a quick 10k run up the hill seemed to have a lasting effect.  I went to the hospital to see the doctor, they took a few X-rays and told me I needed to rest for a while to let the damage to my joints recover.  It is amazing in Mallorca, the health care is really good and the X-Rays show great detail.

All said and done, I am in good shape and will live to fight another day.  When I have something of interest to share, you will be the first to know – until then

What his eyes can’t see

This entry was posted on Sunday, June 5th, 2016 at 22:18 and tagged with Cappuchino, cappuchinos, carrot cake, family holiday, float like a butterfly, french, german, mallorca, Monty Python, palma, palma de mallorca, quality time, sting like a bee, text and posted in Goose Freckles. You can follow any responses to this entry through the RSS 2.0 feed.
« Balearic Bill
I’m not racist but………. »

One response to “Spending Quality Time with the Family”